Guest Blogger #3: Haylie Swenson (Running for the First Time and Then Blogging About It)

I consider myself to be truly blessed to have so many running friends that are also trained in the ways of the pen (/keyboard). Today Haylie Swenson, who is currently pursuing her masters in English at George Washington University, enlightens us with the experiences and questions that arise for first-time runners. When Haylie isn’t guest-blogging for me, she can be found host-blogging on her own blog, or her shared creativity/pretty things blog, My Cherry Amour. Otherwise she is probably taking a nap.

*I stole this picture from facebook as usual, but with permission this time! I chose this one because it portrays how runners also love to nap, and that animals are cute.

Running for the First Time and Then Blogging About It

Here are my two most vivid running memories:

1. I’m in 8th grade. I’m not at all athletic (which will continue to be true for grades 9-15), and yet for some reason I’m doing surprising well at a P.E.-mandated mile-long run through town. Really well, actually. Maybe it’s because I just want to get the whole thing over with, or maybe I’m actually experiencing a competitive streak, but for some completely inexplicable reason I pull into the mile’s final stretch at the head of a pack of bored pretty girls with whom I am blessed to share the joys of physical education. For one brief, shining moment I understand what it might feel like to be athletically competent. Then, with only a few yards to go, one of the snotty girls pulls ahead of me and finishes first. Fact: I never have been, and never will be, fast. Her victory feels like class warfare.

2. I’m a senior in college and I’m on Pacific’s club rowing team, which allows me to feel reasonably athletic. I love rowing, but it’s January or February and the lake is closed due to its being effing cold outside. So instead of rowing, we’re running. We start by running a few blocks around our postage stamp-sized campus. This should be fine, but there’s one problem. Remember the part where it’s effing cold out? Turns out, my ears are super sensitive to cold, so by the time we’ve run our blocks I have a splitting, horrible, world-ending head/earache. Also, because of the fact that I’m the slowest person in the world, I’m the last to make it back to the gym, where Coach Eric has prepared a new batch of torture. We partner up and started running around the gym. Each partner has to take turns lapping her other, still running, partner. I still have a piercing headache. Also (and I really hope this is clear), I am REALLY FREAKING SLOW. It takes everything I have (and a solid two or three laps of all-out sprinting) to pass my partner even after she’s slowed to just about a walk. The practice feels like it lasts forever, and at the end I’m pretty sure I burst into tears. 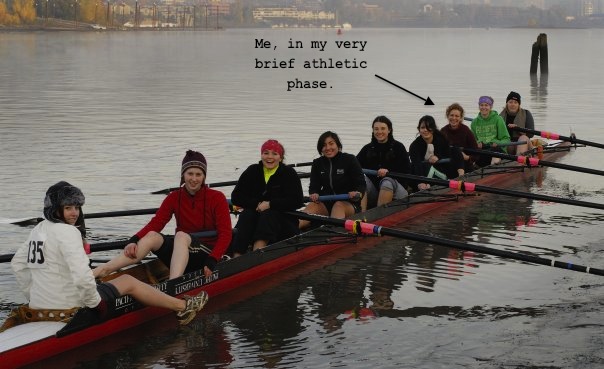 Let’s sum up: Running = humiliation, pain, tears, and class warfare. Also, I run like a stick figure (all elbows and knees). Good times. And yet, for some reason, two weeks ago I decided I wanted to be a runner. There are a couple of reasons for this: First, I know a lot of excellent people (Colleen, Kathayoon, Annette, etc.), who are runners. By this I mean that they run, on purpose, and to my knowledge don’t come home in tears. That’s inspiring stuff, right there.Second, I’m a graduate student studying medieval and early modern literature. I’m a Grade-A Academic, a real library parasite, and I therefore spend a lot of time sitting on my butt in front of books. This worries me less because of my weight (I come from a long line of naturally skinny people), than because of my health (I come from a long line of naturally skinny people with bad hearts).

Third, I happen to live right next to a pretty great river trail where I can run with a minimal amount of people laughing at my stick-figure running form and – bonus! – see rabbits and birds and deer. I also have some time in my mornings these days, since none of the classes I teach start before 9am and I’m used to getting up at 6:30.

Fourth (and most importantly), I really wanted to be a guest blogger on Colleen’s blog.

So, with the above reasons in mind, two weeks ago I began running. I’ve been using this training plan that I found via Runner’s World magazine, and it’s been doable so far (seasoned runners, I hear you scoffing, and I don’t care. I care a little).

It starts easily enough that I’ve been able to be successful with each run, which is pretty much a first, and a pretty good feeling. I’ve gone for five runs now, and I like it. However, I have a few questions, which I will put to you, seasoned runners:

1. Where the hell do you put your keys? I’ve been clipping them to my sports bra, ’cause I’m classy like that, but I’m open to other suggestions.
2. Because I alternate running and walking, passing people is awkward. I dread passing someone just so they can pass me again when I’m in the walking phase. How should I deal with that? Mostly I just turn around abruptly and run the other direction.
3. What should my ultimate goal be? I’m not fast (did you catch that yet?) and never will be, so should I go for distance? Or a certain time?
4. Sum up the barefoot running debate for me in either fifteen words or less or haiku form. Thank you.

I must confess, I started running at a very early age. Sadly, my runs were unblogumented until around age 23, so you'll have to use your imagination for all the runs I went on before that. Running has always been my go-to sport, but sadly, I spend a good amount of my time with chronic injuries. I have learned to entertain myself athletically with other pursuits such as kettlebell, yoga, and bikini competitions, when I can't run. In addition to my unique talent for working out and then blogging about it, I am an amateur puppy stylist and photographer, television enthusiast, and I'm usually CPR/AED certified, but I would still prefer if you didn't pass out when we're together.

This site uses Akismet to reduce spam. Learn how your comment data is processed.

I’m Colleen. I started this blog when I was 23 years old and training for my first marathon. I was single, semi-employed, generally directionless in life, and had a lot of free time on my hands. I have a lot less free time now, but I still love to come here and dump my rambling, unedited thoughts after a workout or race once in a while.